Bowled him around his legs – Shane Keith Warne does it again!

A special tribute to the greatest spin bowler EVER to grip the cricket ball!!

As kids growing up in the 90’s, we all have tried imitating the legendary Shane Warne’s bowling action. Whether it was a cricket match or just walking down a lonely road, a slow walk and then zip through the crease. We all have tried shadow bowling like the king, but have failed miserably at it. Do you know why? Because, Leg spin in the cricketing world is considered to be the most difficult art to master. And there was the King, The Picasso of this ART! Shane Keith Warne!

Shane Warne, The Magical Leg spinner & The ball of the century:

When I say Shane Warne, People Echo Leg Spin, When I say Leg Spin everyone echoes Shane Warne! That’s the impact of Shane Warne on Leg spin and the cricketing world. There hasn’t been a greatest spin bowler & Match winner with the ball who can even come close to Shane Warne. Yes, Muttiah murlitharan & Anil Kumble were absolute beast too, No second thoughts about it. But, Shane Warne was MAGIC! The ball of the century to Mike Gatting is still spinning fresh in every cricket lovers memory(Click here for video). The grip, the revs on the ball and then the zip and the turn of that particular ball cannot be matched ever again. It wasn’t just this ball which mesmerized the cricketing world. Shane Warne had a bag full of magical leg spinners which turned the world upside down, just like the batters would go upside down facing the legendary spinner. Andrew Strauss is still wondering how that ball in Edgbaston in the famous Ashes series of 2005 went right through this defensive gates and probably would still be smiling in disbelief seeing the highlights. (Click here for video)

In a recent interview, The great Anil Kumble was quoted saying “If You are frineds with Shane Warne not even a single aussie player would dare to sledge you” That’s the respect the legendary Shane warne had earned over the years. Shane warne was of the opinion that a batter shouldn’t play the man but the ball and he would do anything and everything in his sledging armory so that the batter plays the man instead of the ball. An incident between Shane & Daryll Cullinan,we couldn’t resist sharing (Click here for video) And Shane warne castled Cullinan in the very next delivery. 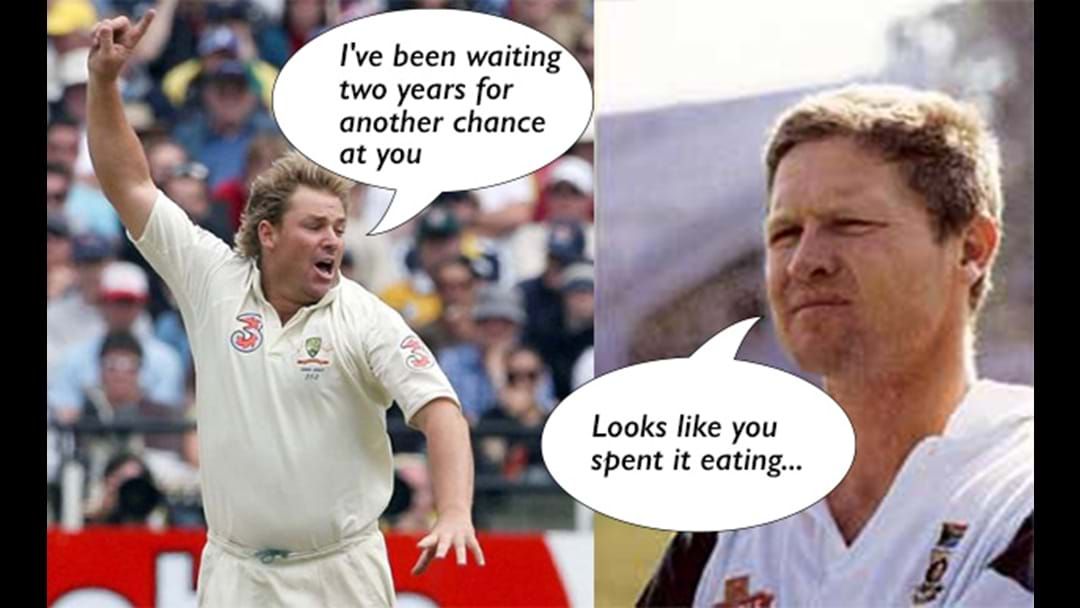 In a recent interview, Nasser Hussain revealed how warney disturbed his mental peace by having a banter with him. And warney got the better of him in the very next ball. There are many such incidents, Where Shane warne won the battle with the sledges and played with the batsmans mind. Apart from shane warne being a hilarious sledger, Warney was a mastermind. He had the ability and vision of taking wickets while commentating about the batter. Not just once, Twice but thrice. We all know how he predicted what Brendon mccullum would do and picked his wicket with a slider in a BBL game(Click here for video). He dismissed Sachin Tendulkar too in a similar fashion in a charity game. That’s how brilliant Shane Keith Warne was. He made the Rajasthan royals the champions of the inaugural IPL season with his brilliant captainship skills & Mindful strategies, As no one had any hopes of royals making it into the play offs, But he made the Rajasthan royals the Darkhorses and went on to win the 1st IPL Season.

Shane Warne, The best reader of the game & The Greatest Entertainer:

Humorous, Controversial, Entertainer, King, These were some of the many synonyms that we would reciprocate with the Legendary leg spinner. Yes, Shane Warne lived his life by the edge of the sword & he could hardly stay away from controversies due to the same. 9 out of 10 cricketers who played along or against Shane warne said “There was never a dull moment with Shane Warne around.” Warney had a sixth sense for things, He 100% did. He would just at times read the game better than anyone else. He was caught on commentary predicting wickets and guess what, THE EXACT THING HAPPENED!(Click here for video). Once we saw an animated shane warne as he got agitated on his fellow aussie, Mark Nicholas.When a commentators curse ended up taking David Warners wicket(Click here for video). A heavy drinker & smoker and love for gambling, Warney lived a life full of adrenaline rush. A complete ladies man who could could just win over any women with his charm. As many recalled after the untimely demise of the legend, “Warney’s heart couldn’t handle his lifestyle”. Yes at the end of this amazing journey of the Spin Wizard, we all can agree on one thing for sure: Shane warne lived his life KING SIZE & to the fullest with ZERO regrets. Warney himself might just give us a thumbs up agreeing to that by sliding in a fast flipper from the gates of heaven.

I’m pretty sure, We all would have our special anecdotes from warne’s career & life which I as an admirer of Warney would love to hear about. C’mon shoot your favourite Shane Warne memory down below:

Which IPL teams have given their best performances till now?
Shraddha Raval 764 Views

Who will be the Next Sachin, Kohli or Zaheer ?
Kannan Nair 405 Views

What changes will happen in IPL 2020?
diptishaw 661 Views

What are the special features provided on criconet?
Satyapal Singh 817 Views